It’s my first time participating & I’m really excited for the month ahead. I might not read a ton of new works (I’m stepping up work on editing my novel this month for Nanowrimo) but I can’t wait to dig in to the Sci-fi portion of my TBR. Without further ado, here is a little bit more of an intro:

Tell us a little bit about yourself

I’ve been a fan of sci-fi & fantasy stories since pretty much forever.

I have a booktube channel that focuses on SFF and I’m currently writing a steampunky-horrory Victorian medical mystery, complete with an airship crash and mutated carnivorous plants.

Aside from books, I like crafting, board games, chocolate, twitter and my cat, a 10-year-old rescue called Tabby, who is the sweetest, most ridiculous feline ever.

How long have you been a fan of science fiction?

I came to science-fiction through fantasy: I was raised on The Hobbit & Lord of the Rings as bedtime stories & fell completely in love with Dragonriders of Pern when I was 12. As soon as those books took a sci-fi turn, I was hooked & wanted to read more.

In high-school, I neglected assigned reading & devoured classics like Brave New World, Farenheit 451 and 1984 instead. Now I’ll read anything that can be labelled as genre fiction, but I especially love social science-fiction, historical fantasy & weird books that mixes genres.

Why do you like sci-fi and what is your favourite thing about it?

I’m obsessed with all the ‘What ifs?’ in speculative fiction, so I tend to love big books with epic world-building or really weird ideas. Before I moved to the UK, I did a degree in English Language, Literature & Cultural History, and I’m still quite nerdy about these things. I love a book that goes deep into explaining a culture, or discusses language in an innovative way. The linguistic & cultural aspects were my favourite thing about Ann Leckie’s Ancillary Justice and its sequels.

Favourite books/games/films/TV shows in the genre?

Well that’s certainly a broad question! Let’s tackle these one by one:

All time favourites include The Dispossessed, Dune & Nightfall. Recently, I’ve really enjoyed The Martian, but the latest books to really stand out for me have been Neal Stephenson’s Seveneves & Ann Leckie’s Imperial Radch trilogy.

My current favourite is FTL: Faster Than Light, a tense resource-management rogue-like with awesome pixel art. I also really, really want to play Civilization: Beyond Earth but my current PC specs isn’t quite up-to-scratch. One day… 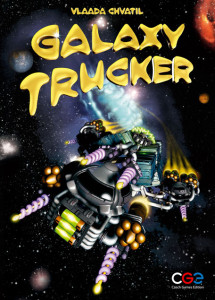 One of my favourite board games ever is Galaxy Trucker: a space opera game in which you’re just trying to get to the end of the mission with your spaceship in one piece. That’s be easier if you didn’t build your spaceship out of random parts at the opening of each game, in a timed, competitive tile-laying round.

I also really enjoy Race for the Galaxy, a card game in which you build a space empire by collecting planets – it also gets bonus points for being an excellent two-player game.

I don’t go to the cinema nearly as much as I’d like to, as it’s gotten ridiculously pricy, but I recently saw The Martian & absolutely loved it. Here’s to hoping its success means we get more cool sci-fi films! Honestly my sci-fi film knowledge is lacking A LOT, so if you have any suggestions for things I should watch please let me know in the comments!

I’m an unabashed Firefly fangirl, I love Futurama & I still have a soft spot for Sliders, which I used to watch in high school.

I’m not 100% on calling Doctor Who science-fiction, there’s too much hand-wavy ridiculousness (and I’ll often rage about it), but I still watch. Favourite episodes include Blink & The Doctor’s Wife, I’m also pretty excited about the introduction of Maisie Williams’ character, fingers crossed this plotline goes somewhere neat!

What are your plans for Sci-Fi Month? 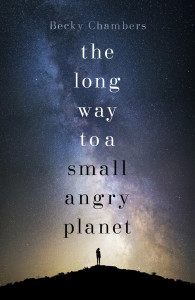 I’m hoping to make a good dent in the Sci-Fi side of my TBR pile, which includes The Three by Sarah Lotz, Binti & The Book of Phoenix by Nnedi Okorafor, and Calculating God by Rob Sawyer.

I’m currently reading The Long Way to a Small, Angry Planet by Becky Chambers, and I will be hosting the 3rd week of the Readalong organised by Lisa at Over the Effing Rainbow.

I have a signed book and a few other sci-fi themed bits & bobs to give away, so keep an eye out for that later in the month!