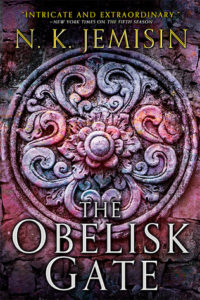 The season of endings grows darker as civilization fades into the long cold night. Alabaster Tenring – madman, world-crusher, savior – has returned with a mission: to train his successor, Essun, and thus seal the fate of the Stillness forever. It continues with a lost daughter found by the enemy, with the obelisks and an ancient mystery converging on answers at last.

The Stillness is the wall which stands against the flow of tradition, the spark of hope long buried under the thickening ashfall. And it will not be broken.

This is quite a tricky book for me to rate and review because while it’s clearly very well written, I didn’t find it as enjoyable a read as The Fifth Season. I’m glad that I did read it because I’m still interested in the story and characters, but I found it a difficult read – very much worth the extra time and attention but still, not an easy reading experience.

In my review of The Fifth Season, I mentioned that Essun’s point of view was my least favourite since it’s narrated in second person. Once again, the writing of the second person narration is impressively well-handled, as is the reveal that one of the characters is in fact the narrator. This was such a smooth transition that I couldn’t remember if it had been introduced in The Fifth Season, or if it was new information. And yet, I still found the second person point of view difficult to read. It still felt weird and occasionally jarring to me.

The second point of view character introduced in this book is Essun’s daughter, Nassun, who is mentioned throughout the previous book, but who we haven’t yet properly met on the page. I enjoyed Nassun’s point of view a lot, and it was great to see her transform into a character in her own right, when she had been little more than a source of motivation for her mother in The Fitfh Season. It’s fascinating to get Nassun’s take on things, which is so different from her mother’s. Seeing this child’s interpretation of Essun’s careful teaching really underlines the sacrifices Orogenes face in this world for the sake of absolute self-control, which is so crucial to their survival.

It was somewhat distressing to see Nassun align with her father in the full knowledge that he had killed her little brother Uche for being an Orogene. in further very troubling company, Nassun then begins to associate with a character who makes a surprise from The Fifth Season, with a bit a new personality (woot, amnesia & mind-control!). I particularly enjoyed seeing Nassun’s opinion of the people around her and of her distant mother evolve throughout the book. As Nassun grows older and learns more about Orogeny, her father and the Fulcrum, she adjusts her view of the important players in her life in a way that gave me hope for her in the future.

Much like its predecessor, the Obelisk Gate is incredibly brutal and includes scenes of body horror which some people might find a bit too much. I was okay with them, but it did make it a bit more difficult to take genuine enjoyment out of the book when I kept thinking ‘Great writing, very effective, EWWWW’. There was a lot of me cringing at the places Jemisin was willing to go and trying hard not to visualise. There’s a revelation right at the end of the book that makes a lot of sense and that I probably should have seen coming. I won’t say what it is, but I will say it’s making me weary about the amount of graphic description of body horror there will be in the next book. There are some things I don’t really want to read about happening to a main character I care about, especially not when the narration kept calling her ‘you’…

I’m not surprised that this wasn’t an easy read, nor I am saying it’s necessarily a bad thing. Not every book can or should be an easy or straightforward read, and this feels to me like it was written to be layered, subtle and wonderfully challenging. In The Obelisk Gate, Jemisin creates a fascinating and demanding story, whose depth and complexities are well worth taking the trouble to fully engage with.