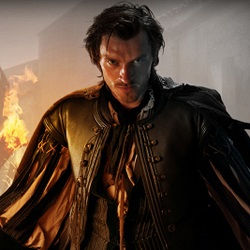 Anne Lyle’s The Alchemist of Souls follows the adventures of Catholic swordsman-turned-spy Maliverny Catlyn through Elizabethan London with a twist.

Mal, his friend Ned Faulkner & cross-dressing seamstress Coby Hendricks find themselves at the heart of political intrigue during the visit to England of the Ambassador of the Skraylings, a fay-like race from the New World.

I’m going to keep plot details at that because it is really too good a book to spoil. Let me just say there is swashbuckling-ness galore, a theatre competition, very cool magic… And it’s set in 16th century London. How much better can it get?

I came across this book some time before it was published, when the author posted her success story on the forums for How To Revise Your Novel, an online course she had completed and I had just started. The story sounded great, the cover art was lovely and supporting a debut author was a nice bonus. I made a note to buy the book when it came out.

I ended up listening to the audiobook which was a great treat, as the voice actor, Michael Page, was phenomenally good. I looked him up and was not surprised to see he also narrated The Three Musketeers and the Illiad and several works by Dickens and Austen.

I don’t actually have anything bad to say about this book, I really, really enjoyed it, to the extent that I went back and listened to some of the story’s climax again because it was so cool. I will most definitely be buying a paper copy (probably hardback as well, otherwise it won’t match the next two which I know I’ll buy right as they come out), and probably get it signed at some Con or other.

Anne’s blog and writing journal feature well-written, insightful and informative posts; she also @replied me on twitter, and I felt all giddy because I’m a dork. But a dork who feels massively inspired by this really nifty debut.