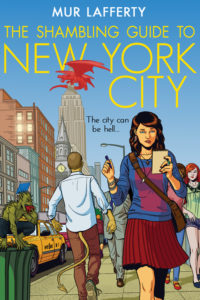 Zoe’s last job was a train wreck. She’s back in her home town of New York City, desperate for a new start, but running out of cash fast.

So when she finds an ad for a seemingly-perfect job as a travel guide editor, she’s not going to let the excuse that ‘she’s not the right type for the job’ and ‘wouldn’t fit in with the team’ stand in her way. Sheer determination wins her an interview in a dilapidated theatre and dinner with her potential new boss.

It turns out the job is to write a guide book for New York’s visiting monster population. The boss is a vampire, and the payroll includes zombies, an incubus and a death goddess. Zoe has to come to terms with the existence of another world, hidden in plain sight in her city, and learn to deal with her new co-workers often-disturbing feeding habits. When the balance between humans and coterie (monster is an offensive term) starts falling apart, Zoe is caught in the crossfire.

The Shambling Guide to New York City is an absolutely delightful almost-debut from RPG writer, Escape Pod editor and podcaster extraordinaire Mur Lafferty, whose career I’ve been following for some time. This is not her first published work (she has self-published the Heaven series through Kickstarter and her novel Playing For Keeps came out from Swarm Press in 2008) but it is her best yet.

She presents us with a rich supernatural underground to New York City, full of hilarious anecdotes and smart tweaks to reality (the MoMA’s closed galleries are really hired out by visiting demons who are too big to fit in human-sized hotels) told through excerpts from the book Zoe is writing. As a protagonist, Zoe is made even more likeable because she shows real strength of character, even as she has to accept her weaknesses in dealing with an overwhelming situation.

After her engrossing and thought-provoking novella Marco and the Red Granny, Lafferty gives us another kick-ass elderly woman to love and cheer on in the hilarious and irreverent Granny Good Mae. The rest of the varied cast of characters is also handled perfectly so that the reader even likes the brain-eating zombies. This is also a very funny book, Lafferty’s humorous touch is spot-on throughout and her dry observations on the human or coterie conditions made me snort out loud several times.

In short, I can’t wait for the second instalment in this series, The Ghost Train to New Orleans, and you should all go read The Shambling Guide to New York City, out in UK and US bookshops now. You can also go to Mur’s website to listen to a chapter of the audiobook for free every week.