This week’s Top Ten Tuesday is All About Audio, a freebie on anything audio-related, so of course I wanted to talk about audiobooks!

I’ve gone over my favourites before (shamelessly embedding the video in question right here for you to check out!) so I thought today I’d go for something a bit different and tell you about some of the audiobooks currently sitting in my Audible library:
an Audible book haul of sorts!

The Muse by Jessie Burton [Goodreads]

London,1967. Having struggled to find her place in the city since she arrived from Trinidad five years ago, Odelle Bastien now works as a typist under the tutelage of the glamorous & enigmatic Marjorie Quick. The plot thickens when a lost masterpiece with a secret history is delivered to the gallery.

Rural Spain, 1936. Artist and revolutionary Isaac Robles & his half-sister Teresa insinuate themselves into the life of Olive Schloss, the daughter of a renowned art dealer, with explosive and devastating consequences…

I enjoyed Burton’s debut The Miniaturist – particularly the detailed & immersive portrayal of historical Amsterdam – so I’m eager to see what she makes of 70s London & the Spanish Civil War. I’ve also heard really good things from a librarian friend of mine – always a good sign! 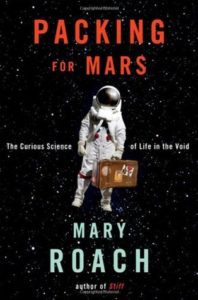 Space is a world devoid of the things we need to live and thrive: air, gravity, hot showers, fresh produce, privacy, beer. Space exploration is in some ways an exploration of what it means to be human. How much can a person give up? How much weirdness can they take? What happens to you when you can’t walk for a year? have sex? smell flowers? What happens if you vomit in your helmet during a space walk? Is it possible for the human body to survive a bailout at 17,000 miles per hour?

To answer these questions, space agencies set up all manner of quizzical and startlingly bizarre space simulations. From the space shuttle training toilet to a crash test of NASA’s new space capsule, Roach takes us on a surreally entertaining trip into the science of life in space and space on Earth.

A new Mary Roach book! About SCIENCE! And SPACE!! I’m so excited to read this after getting on the Mary Roach train with Stiff. 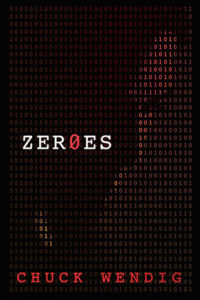 Five hackers are detained by the U.S. government at a secret complex known as the Lodge. Forced to work as an elite cyber-espionage team in the service of Uncle Sam to avoid federal prison, these misfits dub themselves ‘the Zeroes’.

Once the Zeroes begin to work, they uncover secrets that would make even the most dedicated conspiracy theorist’s head spin. And soon they’re not just trying to serve their time, they’re also trying to perform the ultimate hack: burrowing deep into the U.S. government from the inside, and hoping they’ll get out alive. Packed with electric wit and breakneck plot twists, Zer0es is an unforgettable thrill ride through the seedy underbelly of ‘progress’.

I’ve not actually read anything by Chuck Wendig before & I’ve been meaning to remedy that – then I saw this in an Audible sale & I just had to pick it up. 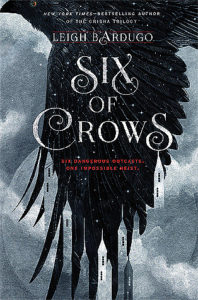 Ketterdam: a bustling hub of international trade where anything can be had for the right price – and no one knows that better than criminal prodigy Kaz Brekker. Kaz is offered a chance at a deadly heist that could make him rich beyond his wildest dreams. But he can’t pull it off alone…

A convict with a thirst for revenge, a sharpshooter who can’t walk away from a wager, a runaway with a privileged past, a spy known as the Wraith, a Heartrender using her magic to survive the slums, a thief with a gift for unlikely escapes.

Kaz’s crew are the only ones who might stand between the world and destruction – if they don’t kill each other first.

Here’s another book I picked up in an Audible sale, and it’s 100% booktube’s fault. 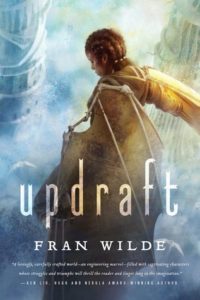 Kirit can’t wait to pass her wingtest, so she can start flying in service to her home tower, and exploring the skies beyond. When Kirit inadvertently breaks Tower Law, the city’s secretive governing body, the Singers, demand that she become one of them instead. To try and save her family from greater censure, Kirit must give up her dreams to throw herself into the dangerous training at the Spire, the tallest, most forbidding tower, deep at the heart of the City.

As she grows in knowledge and power, she starts to uncover the depths of Spire secrets. Kirit begins to doubt her world and its unassailable Laws, setting in motion a chain of events that will lead to a haunting choice, and may well change the city forever-if it isn’t destroyed outright.

I originally got this because it was being nominated for so many SFF awards, but then Andrea Philips mentioned it has a bit of a Dragonriders of Pern vibe & I got very VERY EXCITED. It’s now moved to the top of my TBR list! 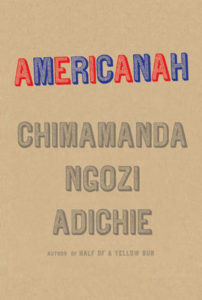 As teenagers in a Lagos secondary school, Ifemelu & Obinze fall in love. Their Nigeria is under military dictatorship, and people are leaving the country if they can. Ifemelu departs for America to study. She suffers defeats and triumphs, finds and loses relationships and friendships, all the while feeling the weight of something she never thought of back home: race. Obinze had hoped to join her, but post-9/11 America will not let him in, and he plunges into a dangerous, undocumented life in London.

Years later, Obinze is a wealthy man in a newly democratic Nigeria, while Ifemelu has achieved success as a writer of an eye-opening blog about race in America. But when Ifemelu returns to Nigeria, and she and Obinze reignite their shared passion – for their homeland and for each other – they will face the toughest decisions of their lives.

I’ve had this in my Audible library for a little while & I was hoping to get to it during #Diverseathon, but it was a bit too long to cram into that week. 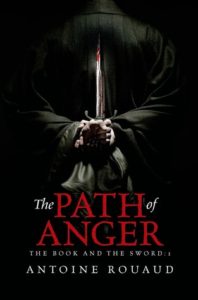 The Path of Anger by Antoine Rouaud [Goodreads]

Dun-Cadal has been drinking his life away for years. Betrayed by his friends – who turned their back on their ideals in favour of a new republic – and grief stricken at the loss of his apprentice, who saved his life on the battlefield and whom he trained as a knight in exchange, he’s done with politics, with adventure, and with people.

But people aren’t finished with him – not yet. Viola is a young historian looking for the last Emperor’s sword, and her search not only brings her to Dun-Cadal, it’s also going to embroil them both in a series of assassinations. Because Dun-Cadal’s turncoat friends are being murdered, one by one… by someone who kills in the unmistakable style of an Imperial assassin…

I picked this up some time ago to read for my series on translated fiction, but after a couple of disappointing translated reads, I took a short break from that project which turned into a much longer break – woops. I do really want to get back to it soon. 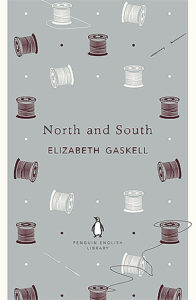 North and South depicts a young woman discovering herself in a nuanced portrayal of what divides people and what brings them together.

Elizabeth Gaskell’s compassionate, richly dramatic novel features one of the most original and fully-rounded female characters in Victorian fiction, Margaret Hale. It shows how, forced to move from the country to an industrial town, she develops a passionate sense of social justice, and a turbulent relationship with mill-owner John Thornton.

You can blame Richard Armitage’s face for this purchase, which may or may not have been made while I was  watching the BBC mini-series. When I first heard about this classic romance set in Victoria Britain, with bonus industrial relations subplot & actual working class people, I couldn’t believe I’d gone so long without knowing about it! Now I’m just saving it for a dreary day when I’m in need of a pick-me-up. 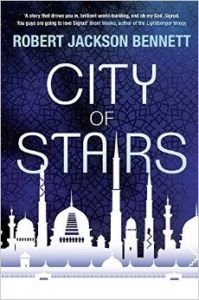 Years ago, the city of Bulikov wielded the powers of the Gods to conquer the world. But after its divine protectors were mysteriously killed, the city was conquered, its proud history erased & censored. Progress left Bulikov behind, just another colonial outpost of the world’s new geopolitical power.

Into this musty, backward city steps Shara Thivani. Officially, she is just another lowly diplomat sent by Bulikov’s oppressors. Unofficially, Shara is one of her country’s most accomplished spymasters, dispatched to investigate the brutal murder of a seemingly harmless historian. Soon Shara begins to suspect that the beings who once protected Bulikov may not be as dead as they seem…

This was an impulse buy I got on sale around the time the book came out (if I recall corectly, it was after hearing a particularly good recommendation on Shipping & Handling). I think the sequel is already out too, so I can go straight onto book two if I enjoy it. 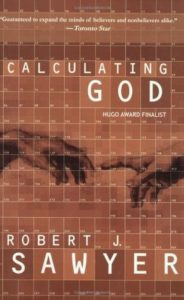 An alien shuttle craft lands outside the Royal Ontario Museum in Toronto. A six-legged, two-armed alien emerges and says, in perfect English, “Take me to a paleontologist.”

In the distant past, Earth, the alien’s home planet, and the home planet of another alien species, all experienced the same five cataclysmic events at the same time (one example: the meteor that wiped out the dinosaurs). Both alien races believe this proves the existence of God: i.e., he’s obviously been playing with the evolution of life on each of these planets.

I’m not gonna lie, this one just sounded hilarious! I’ve read & enjoyed Robert Sawyer before, and came across this one in a sale. The blurb made me laugh & somehow the book found its way into my library. This is why I’m not allowed to click on that gorgeous little ‘Get 3 extra credits’ button any more.

Let me know in the comments what books you’ve acquired recently & if you’ve read anything from this list. If you do your own list, please link back to The Broke and the Bookish, who created and hosts Top Ten Tuesday.