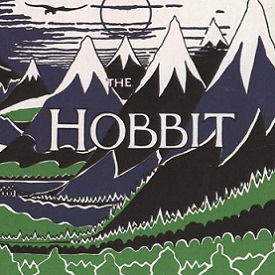 When my brother and I were small, my mother read us The Hobbit, and then the Lord of the Rings before bedtime.

If the goal was to get us to sleep (as she claimed it was), then it failed rather tremendously. We got fired up at the story and us pleading for ‘One more page!’, ‘Two more!’, ‘To the end of the chapter, pleeease!’ became a nightly occurrence.

I started reading under the covers with a flashlight, thinking I was sneaky.

However, I don’t doubt for a second that her ulterior motive was to get us wildly hooked on stories for life, and in this she was very, very successful. We became unrepentantly voracious readers and though she did have to spend rather a lot of money on books, I think she was quite pleased with herself on that front.

The Hobbit is one of the first stories I can remember being told, but I hadn’t heard it in a very long time, nor ever read it on my own. When Peter Jackson’s Lord of the Rings came out I read the trilogy for myself (in French, as well as chosen passages in English), but for some reason, I never did the same with The Hobbit.

So I decided to splash out and get the audiobook for The Hobbit in anticipation of the first film. I also got the new starter set of table-top miniatures from Games Workshop, because I do like things which are tiny and paintable. Also goblins are cool. I have goblins now.

About the audiobook, first I was really annoyed with Audible.com for splitting the book into two parts, each priced at one full credit. As a subscriber, I pay about $15 a month for one credit, which normally buys me one full book. As in one full Connie Willis or Frank Herbert book. Brandon Sanderson’s The Well of Ascension is 29 hours long, and it was one credit. The Hobbit’s audiobook is ‘only’ 11 hours long, making each part among the very shortest audiobooks I own.

I ended up paying for the two parts of the book with dollars rather than credits. I do get a subscriber’s discount, so it was only about $18, but that is quite steep for a regular book, and it is more than I already pay monthly as a subscriber. Yes, Peter Jackson is making three movies and we’ll have to shell out for a 3D ticket each time, but at least there I can see the added value (sets, costumes, props, makeup, etc…). I trust I’ll get something breath-taking for my money, whereas as good as this audiobook was, I really don’t see anything that qualifies it to be pricier than Dune, which is more than twice as long.

Grating pricing strategy aside, I truly enjoyed the book. I didn’t remember most of the story, so I had a lot of fun rediscovering it. The premise for Bilbo accompanying the dwarves was a bit silly (there are thirteen of them, so they need a fourteenth of their company to avoid ill luck) but I was excited enough to just roll with it.

I enjoyed Bilbo’s character very much, particularly his food-related pragmatism (I think I may be a Hobbit at heart) and the difficult decision he makes throughout. I found him a lot more relatable than Frodo, probably because he is able to retain a sense of humour at this point. The ring later spoils him a bit too, as seen in that really creepy scene in the Fellowship when Ian Holm’s Elderly Bilbo wants to keep the Ring for himself.

Rob Inglis’ narration was top-notch, his voice and accent suited Tolkien’s grand use of language perfectly. I am a total sucker for his old-fashioned turns of phrases and his omniscient, fourth-wall-breaking point of view. Inglis also did all the songs wonderfully. A lot of people seem to complain about the songs throughout The Hobbit and the Lord of the Rings, but they’ve always been a special treat for me, especially in the English versions. The low chorus of the dwarves in the trailer for An Unexpected Journey gives me goose bumps every time.

So, on the whole, I’m very happy that I took the time to rediscover the book before going to see the film. And I am so, SO VERY EXCITED for it!