What better way to start Sci-Fi Month than with the opportunity to win some shiny swag? Everybody loves shiny swag right?

So, without further ado, I present my very first giveaway! *squee*

The rules & the swag

The rules are pretty simple:

– Since the prizes aren’t too heavy, this one will be an international giveaway.

– To enter, scroll down to the rafflecopter at the end of this post, and submit your entries. A winner will be selected at random once the raffle has closed.

And here’s what you can win:

– A signed copy of Planetfall, the latest novel from Emma Newman. The book came out from Roc on November 3rd and is getting a lot of good buzz. I’m leaving the blurb as well as my video review below if you’d like to know more about it.

– A robot-themed tote bag. It’s a nice sturdy bag, with a bright robot print on the side & it was exclusive to GollanczFest 2015, so you can’t get one elsewhere. Since this was a goody bag, it comes with little extras like novel previews & buttons.

From the award-nominated author Emma Newman, comes a novel of how one secret withheld to protect humanity’s future might be its undoing… 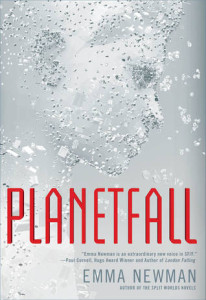 Renata Ghali believed in Lee Suh-Mi’s vision of a world far beyond Earth, calling to humanity. A planet promising to reveal the truth about our place in the cosmos, untainted by overpopulation, pollution, and war. Ren believed in that vision enough to give up everything to follow Suh-Mi into the unknown.

More than twenty-two years have passed since Ren and the rest of the faithful braved the starry abyss and established a colony at the base of an enigmatic alien structure where Suh-Mi has since resided, alone. All that time, Ren has worked hard as the colony’s 3-D printer engineer, creating the tools necessary for human survival in an alien environment, and harboring a devastating secret.

Ren continues to perpetuate the lie forming the foundation of the colony for the good of her fellow colonists, despite the personal cost. Then a stranger appears, far too young to have been part of the first planetfall, a man who bears a remarkable resemblance to Suh-Mi.

The truth Ren has concealed since planetfall can no longer be hidden. And its revelation might tear the colony apart…

If you’d like to hear what I thought of Emma Newman’s Planetfall, check out the review I filmed for my booktube channel:

If you’d like to win a signed copy of Emma Newman’s latest novel Planetfall and a sturdy robot tote bag from GollanczFest 2015, use the Rafflecopter below to submit your entries:
a Rafflecopter giveaway

Please don’t hesitate to ask if you have any questions! I’m new at this giveaway malarkey & I’m sure I’ve forgotten something or other…