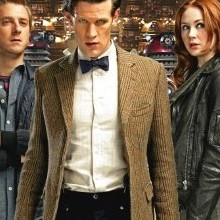 The new series of Dr Who opened yesterday, so naturally we had some friends around to watch the episode and nerd out over it in style.

Pre-Who preparations included watching the Dr Who cast bowling with Wil Wheaton on YouTube and catching up on Pond Life.

We also bought a nifty mcguffin to connect our hitherto games-and-DVDs-only TV to the aerial.

@NickMB even came up with a themed drinking game:

The episode itself was fun and creepy, if full of things that didn’t really make sense – but I’ve come to accept, especially over the course of the past series, that Things That Don’t Really Make Sense are kind of a fixture on Dr Who.*

What still irks me is that it seems like the writers are trying to have it both ways:
– On the one hand the Doctor is Mr Logical, and figures out something is wrong with Oswin because she claims to be baking but where does she get the ingredients?
– On the other hand, the whole crew escapes on the TARDIS which just happens to have found its way on the Dalek ship somehow.

The Daleks! I loved the idea that the Daleks find beauty in pure hatred, a bit like Dexter admires talented serial killers. And the concept of a planet full of something that actually scares the Daleks (when one Dalek was enough to reduce Nine to panic!) was truly powerful. We’re a far cry from their fantastic Doomsday assertion that the Cybermen ‘ARE-BE-TTER-AT-DY-ING’. Near-fossilised Daleks coming slowly back to life were suitably scary and I loved the very tense moment of panic the Doctor had when he was backed in the door frame.

Of course, the effect was slightly ruined for me by the idea that the Daleks now have a place in their heart for Parliamentary Democracy. The rest of the evening was spent toying with the idea of starting a spoof ‘@DalekMP’, ‘@DalekPM’ or ‘@DalekShadowSec’ twitter account. Shame ‘@DalekBackbencher’ is one character too long for twitter.

Oswin! I enjoyed Oswin as a character, although she seemed very similar to the Doctor in some ways (rapid movements, quick-fire explaining away of her feats of hacking, extreme self-confidence), and just as cheeky as River. Her story felt very creepy and moving, in the same way as that of the little girl who is the library in Silence in the Library and Forest of the Dead.

We know by now that the actor who played Oswin will play the new companion in the Christmas special and possibly beyond, and I have to say, I’m not very comfortable right now with the pattern this all seems to form. I do love a good bit of Timey-Wimey, and there is no denying that Steven Moffat has done it beautifully in the past, but this is bordering on too much.

/** Amy & Rory rant **/ Seriously, what the actual nonsense was that? The five minutes of soap-opera ‘I love you more’/’No, I love you more’ mid-episode just completely took me out of the story and left an utterly sour taste in my mouth. What a ridiculous, lazy way to break up the Ponds, not to mention get them back together in five minutes. There is no emotional pay off from their getting back together because we’ve barely had time to see them apart, and have no idea why they are apart. This made me sigh in exasperation, while I cried buckets in the first ten minutes of UP!, which were silent.

Also, one would hope that two people who have lived through such strange stuff as Amy and Rory have since they met the Doctor would realise that, actually, having lots of babies the traditional way is not the only way to raise a family. /** rant **/

* Now that I’m done writing this, I realised I lied a little bit. These things quite obviously still bother me. Mostly it was fine, though the Dalek Parliament is comedy gold waiting to happen. Just, the ’emotional’ stuff was bad storytelling. Not to mention sexist, because that’s another post altogether and many people have already written it, better than me.