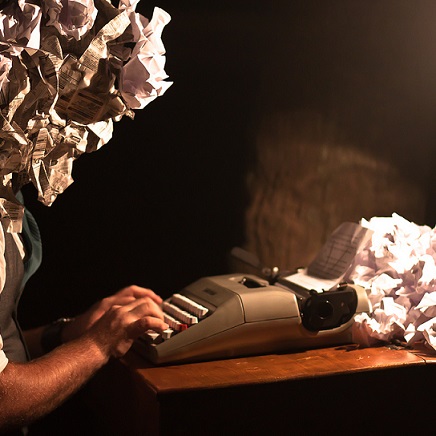 I haven’t written a word of fiction for more than three months.

Real life has been very busy, with work going into overdrive at my office and having to move.

Of course I’m sure it didn’t help that I launched an exciting and time-consuming new website only a few weeks ago, as soon as work resumed its normal level of business.

Needless to say, I’ve already fallen off the Get Your Words Out wagon. I tell myself that it’s because I don’t use LJ much at all anymore that I’ve missed reporting my wordcount so many months in a row, but in truth I’m sure that if I’d had anything positive to report, I would have been all over my journal posting about it.

I remember how excited I was last month to start writing again, and how much I relished the opportunity to dedicate a full afternoon to The Paradise Swarm. The afternoon came and I sat in front of my open Scrivener document for a good 30 minutes, typing and deleting sentence fragments over and over again. I eventually had to pick up a book of prompts and exercises and work on that for an hour or so to warm up my writing muscles, before I was able to produce a miserly and pretty useless few hundred words. Cue disappointment, lack of self-belief, and all that jazz.

I know this is all very ‘woe is me’ but I only mean to underline how much more daunting the prospect of writing regularly becomes when one doesn’t do it, or has never successfully done it. I love my story, and I want to make progress on it. However slowly I was writing last year, I want to regain at least that.

This week, I was really hesitant about whether or what to read out at Writer’s Group. I felt I should read something because I’d already skipped one week, but since I worked on the plot last week a lot has changed. A large chunk of chapter one and the whole of chapter two will have to be re-written, only NOT right now.

I had already read the prologue and I was still working on chapter three, so I settled on the opening of chapter one, a pretty slow-paced tidbit about our main character’s living arrangements. I almost didn’t write it in the first place because I can’t help but feel I will have to cut it in the future. I’m self-conscious about the writing style, of course, but I also worry that the scene is too quiet for the opening of the book.

I wanted supportive advice about this, so I took the plunge and got better feedback than I’d expected. We got rid of some less-than-Victorian words, swapping ‘cagey’ for ‘disreputable’ – definitely a plus! And someone said my description were atmospheric, which was just really, really nice! I often worry than I come across as a bit flowery and long-winded (because I love making flowery, long-winded English!), so it was great to have my description vindicated.

I guess this proves that I’m really not that good at appraising my own work. I don’t know if it’s because I’m too close to it or because I still put ridiculous expectations on my poor first draft, in any case I thought I would get more criticism regarding where the story is going. Then again, not everyone has been working on this for a whole year.

The first time I threw together the words ‘naturalist’, ‘plant swarms’, ‘secrecy’ and ‘upcoming disaster’ in a notebook is dated June 18th, 2011. I’ve considered The Paradise Swarm my main work in progress since then. Meaning that at this point, I’ve been working on it for over a year.

And I realise that in that year, I haven’t accomplished that much story-wise. I have done a whole lot of planning, spent a lot of time world-building in the vaguest terms and written a lot of words that got thrown out, but I realised there still wasn’t much of a plot. I had cool scene ideas, but not a great grip on characters, nor a strong thread around which to weave the story.

Then last week, @TheJonFoulds and I sat down and poked at the holes in the plot and characters with a stick. I can come up with ideas all right on my own, but there is nothing that works better for me than bouncing ideas off of someone else. Especially someone who has an annoying knack for spotting things I did wrong, and a very good instinct for story structure. He also likes being needlessly cruel to his characters (and sadly, mine), which does raise the stakes.

I had to put my foot down at some points, because some of his suggestions simply clashed with who the characters I created fundamentally were, but most of the advice was invaluable. Two hours after we started with ‘So what *does* your main character want most of all?’, we had re-plotted the story from start to finish.

I now know what will happen past Chapter Three, which is a good thing because I’m writing Chapter Three right now. I’ve also been able to put down a whole bunch of new chapters and scenes in my Scrivener file, so that it actually looks like I’m working on something substantial. I love how my Scrivener file looks now: like I’m going somewhere with this!