This November, I’ll be bending the Nanowrimo rules a teensy bit to recycle an old story.

I wrote the initial draft of Stars Shine Brighter for Nanowrimo in 2008, a mess of rushed ideas, mixed up English and French, entire epic scenes condensed to the words ‘[insert space battle here]‘ and truly horrendous writing.

I can say without false modesty that there isn’t ANY salvageable prose in that draft.

Some of the ideas and characters however, have stayed with me and developed over the past four years. I wrote a few extra scenes in that universe for a piece of Creative Writing coursework, kept about five different story notebooks going, restarted from the beginning several, even discussed some of the concepts and ideas with my Dad (who, it turns out, enjoys hard sci-fi!).

I started dissecting that first draft with Holly Lisle’s excellent and gruelling online editing course, How To Revise Your Novel. But around Lesson Eight, when it was time to decide what to keep and what to cut, to create a solid basis upon which to re-write, I realised that there was nothing in the text I felt like keeping.

So I put Stars Shine Brighter firmly on the back burner and let it stew until I felt ready to have another go at it. For a while, I wasn’t sure I would and I was surprisingly okay with that.

After FTL came out though, I couldn’t get the feel of proper, old time Sci-Fi out of my mind. I also found the game thought-provoking in some ways. Though quite comfortable and traditional is some ways (though not easy!), FTL also has weird stuff going on.

My boyfriend, who loves to immerse himself in a game’s narrative, pointed out that it was a bit weird  that your ship, mandated by the Federation, should be so small and crappy and that the enemy fleet, the Rebels, should be so numerous and powerful. Shouldn’t the rebels be a tiny force? And if so many decide to join the Rebellion, is it because the Federation are actually the baddies?

I realised how much more interesting of a story I’d have if my characters, instead of being ragtag space pirates on the run from an army trying to arrest them, were actually part of an army that turned out to be ‘the baddies’. A lot of the themes and ideas I want to play around with fit a lot better with this scenario and I’m incredibly excited to start exploring it.

Onto plotting and outlining then, and bring on November! 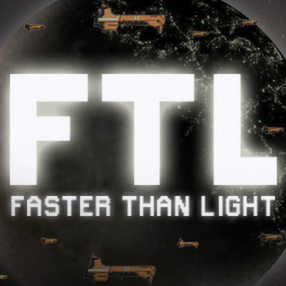 So I meant to do some work this week-end, then this wonderful indie game came out and time kind of disappeared.

It aims to “recreate the atmosphere of running a spaceship exploring the galaxy”.

The idea is that on Star Trek, BSG or Firefly (think Out Of Gas) there’s always something catching on fire, a breach in the hull sucking out the oxygen, a boarding party intent on taking your ship for scrap metal, etc…

The thing about FTL is, it’s actually quite hard. Even pausing the game every time I need to make a decision during battles and playing on easy, I haven’t gotten even close to finishing it yet. 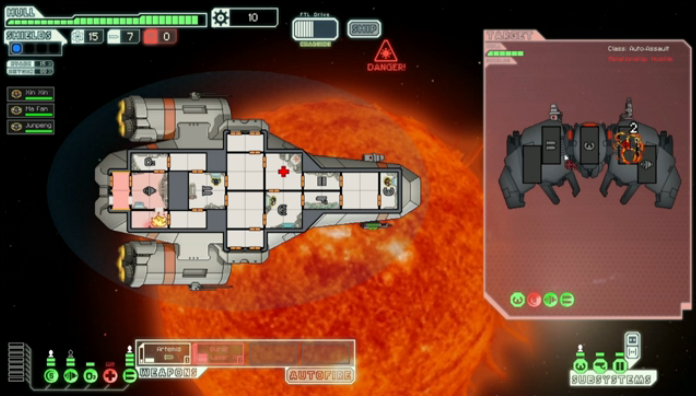 This may be due to the fact that I have a very poor attention span, and not much experience of sticking with games until I got really good at them, or maybe it’s because I take undue risks (by which I mean I go ‘SMASH! PUNY PIRATES!’ before I’m even done reading the explanatory text).

FTL also boasts proper old-time graphics and a lovely score. I’m not usually one to notice music in games but I love what they’ve done here, especially the Rock-people’s theme. The nostalgic aesthetic definitely appealed to this nerd.

The starting ship looks like it was plucked out of Firefly, so I renamed her Serenity and made my starting crew Mal, Wash & Kaylee. It was REALLY cool until I got a hull breach in the O2 room and Kaylee suffocated trying to fix it. Of course the rebels kept firing at my ship while I was busy staring at the screen in horror and yelling ‘NOOO KAYLEEEEE!’, so the hull breach got worse and the ship blew up. 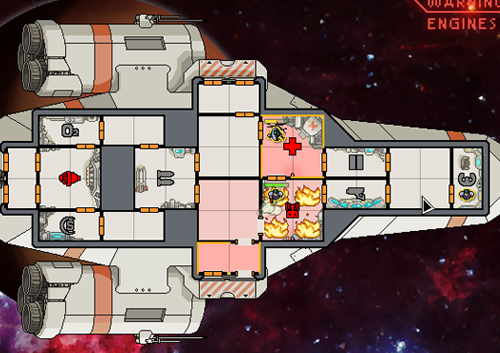 This game is unpredictable, addictive, very easy to pick up but complex to master and I absolutely love it. You should go and buy it now for only $10. It’s available on Steam, but you can get a DRM-free version on www.ftlgame.com.